Keeping functionality that depends on enums in one place per assembly using extension methods and private classes. No more scattered switch statements.

C#'s enums are literally just enumerations, named constants with no functionality of their own. Sometimes that's all you need, but it often that means there are several big switch statements elsewhere in your code where you take a decision based on which enum instance you're passed. This means the behaviours that your enum controls are spread around your code, and decoupling is difficult. If you add an enum instance, you might have to update a lot of other classes to update all the switch statements. How can we avoid this mess, particularly when an enum in one assembly is used in another?

I've written a lot of Java in my time, and my immediate reaction is to think "if only C#'s enums were like Java's". Enums in Java have fields, methods, and constructors, though you can't create new instances at runtime. They're effectively classes with predefined, named instances. 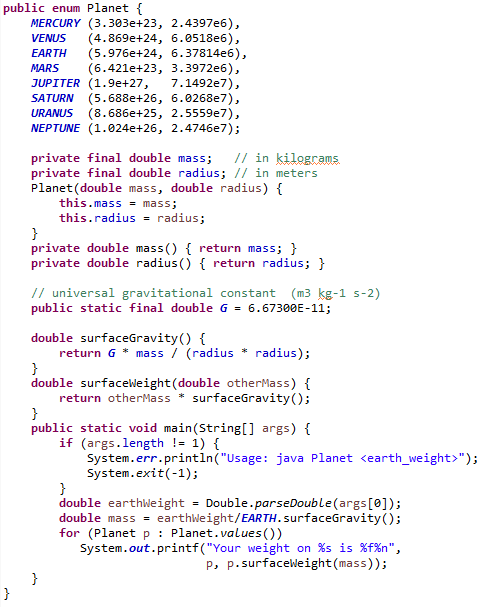 Java's famous Planets example enum. They actually went to the trouble of updating it to remove Pluto when it got demoted. Poor Pluto :(

Is there any way to get something in C# that acts like a Java enum? In most cases this is a solved problem. Way back in 2008 Jimmy Bogard gave us the Enumeration class, which is available as a NuGet package. I'll let his blog post explain in detail, but the core of it is that you create classes that extend his Enumeration class rather than creating enums, and you create a public static readonly instance of the class for each enum entry. You get to keep most of the functionality of an enum like iterating over all the instances (because Enumeration handles that for you), but because you're really dealing with class instances, the "enums" can have fields and methods, so you don't need big switch statements in your code any more, and all the functionality is in one place.

However, with Hexahedra, there's a bit of a snag. As as example, let me show you the DeviceFunction enum, which at first glance seems like an obvious use-case for the Enumeration class. The enum lists all the things that devices in the game can do. Here it is as a basic C# enum:

The DeviceFunction enum, listing all 19 devices

Each device has its own 3D model, so somewhat inevitably there's a big switch statement in the code that gets a Unity prefab for a device. The mapping isn't totally trivial. For one thing, because the Panel Adder and the Panel Remover are the reverse of each other, they use the same model. There are also some special cases for a few devices - the Buffer, which teleports cubes around, usually has two halves, but when it's mounted at the rear of a workstation, there's only room for one, so we need to load a different prefab. It would be handy if I could encapsulate all that.

A switch block in a totally different class. Bonus points because DeviceModelSet is yet another big enum.

Special cases for loading models — another case of functionality depending on the enum but not being defined by it.

A few devices also share behaviours, like allowing the player to branch the logic of a workstation based on the state of its cube.

Part of the code that detects unreachable commands. It would be handy to be able to ask each enum instance if it's a logic-branching device.

Now for the snag: as I discussed in an earlier post Hexahedra is split into two projects. HexSim, the core logic of the puzzle, is provided to the Unity project as a DLL. The DeviceFunction enum is part of HexSim, but all the prefab loading stuff is, naturally, in the Unity side. If I was bundling DeviceFunction up into one big Enumeration class, the prefab naming stuff would end up in HexSim, which is really the wrong side of the divide.

So, how can we sort out the problem of all these switch statements all over the place while keeping each piece of code in the appropriate project? We're going to borrow some of the ideas from the Enumeration class and use them in conjunction with extension methods to attach functions to enums.

To start with, I'll show you code that just uses extension methods to put all the functionality into one place per project, and then we'll refine it.

If we want "is this a branching device?" and "what prefab should I use?" functionality on the enum, we can do this:

We've now gathered all those big switch statements from across the codebase into two static classes, one in each project. The rest of the code is much cleaner and easier to read:

There is one problem, though, which is that the switch statements haven't got any smaller. They are encapsulated, but they still make for a set of lengthy functions. So here's where we're going to borrow from the Enumerations class.

Method 2: Extensions and a private class

We'll leave DeviceFunction as an enum, but within each static extension class we'll create a private class with lots of static readonly instances, and use those to simplify the extension methods. I've just shown the Unity side here:

So here we have the best of both worlds. Using the class-masquerading-as-enum concept from Enumeration we can drop all but one of the switch statements and replace them with method calls. Probably the biggest win in this example is turning lots of if (Position == Facing.TOP) return "prefabName" code into a simple dictionary lookup. And by leaving DeviceFunction itself as a true enum and adding extension methods we can split up the extra functionality between HexSim and the Unity project.

Arguably I could use Enumeration on the HexSim side and the extension method system on the Unity side, but at this point I don't think it gains me much - and in the case of DeviceFunction almost all the complicated functionality is on the Unity side anyway.

So, while I'd definitely recommend using Enumeration when appropriate, if you're crossing assembly boundaries there's still a way to create relatively clean enum-based code.

Hexahedra has a Steam demo — head to the store page to try it out.

Hexahedra also has a live Kickstarter campaign to fund the transition from demo to full release — back the game to get a copy for below launch price, plus other goodies at higher tiers.

Types in the Unity Editor via reflection

How to select from a list of C# classes in a Unity Editor dropdown.…

Buttery Smooth (and a trailer!)

Trailer First things first, yesterday I released a short trailer for Hexahedra, which shows off the latest build of…